WTDC, a Foreign Trade Zone and Logistics company in Miami, FL, is celebrating its 40th anniversary of business with the promotion of Sean P. Gazitua as President & CEO. Founded by the Gazitua family on March 8, 1977, WTDC began as a U.S. Customs General Order Warehouse. WTDC has now evolved into a full-service Foreign Trade Zone and Logistics Company, specializing in inventory management.

Thank you for being part of our 40-year history, we look forward to many more!

“Duty-free and travel-retail industry logistics and Foreign Trade Zone company WTDC has announced the promotion of Sean P. Gazitua as president and CEO.

Gazitua developed an extensive grasp of Foreign Trade Zone Operations and Logistics Management working his way through the ranks at WTDC as operations manager, then director of Logistics, vice-president sales and marketing, and most recently as vice president. 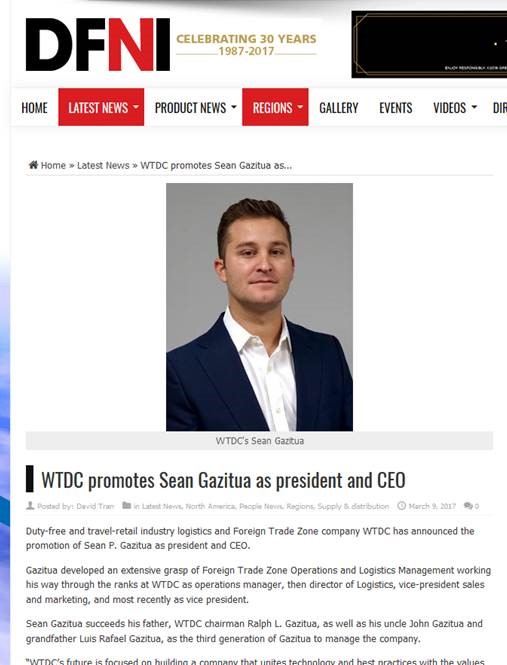 ‘Cuba: A Year in Review’

On Tuesday, March 7th, WTDC Chairman Ralph L. Gazitua was a panel speaker at the Greater Miami Chamber of Commerce’s event ‘Cuba: A Year in Review.’ Mr. Gazitua spoke about the regulations between the U.S. and Cuba, his experience researching business opportunities on the Island, and what the future may hold for U.S.-Cuba relations.

On Friday, February 24, WTDC Chairman Ralph L. Gazitua was a guest speaker for Miami Dade College’s Sigma Beta Delta Honor Society inauguration ceremony. He announced that he would sponsor a scholarship for a student who best reflected on the key points of his speech in an essay to be submitted to WTDC.

We are proud to announce that we have selected Brianna Gutierrez as the winner of the $1000 scholarship.

“Ms. Gutierrez’s essay showed clear demonstration for God, Family, Business, and Legacy which were the key points of my speech. I was very impressed by the accomplishments of Brianna and her family detailed in her essay,” said Ralph L. Gazitua, WTDC Chairman.

“It was an honor to give the invocation today for the graduation of the Colombian National Police trained by MDPD. We are blessed to have such skilled officers protecting our community. It is a great outreach program for the MDPD to share its knowledge and expertise so that other communities can benefit from having a highly-skilled tactical response team,” said Mr. Gazitua.