Juan M. Kuryla, PortMiami Director and Chief Executive, Emilio Gonzalez, Aviation Director and CEO of Miami International Airport, and Steven Cernak, Chief Executive and Port Director for Port Everglades each gave updates and their comments seem to be in accordance with Ken Roberts, President of World City, who said  trade through South Florida seems to be “back on good footing.” 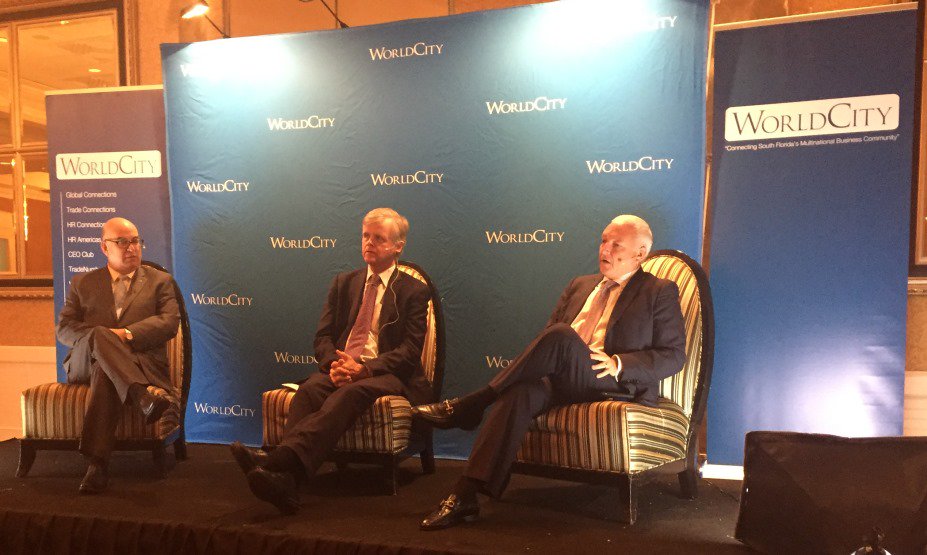 WTDC Intern Elin Ekdahl recently joined our Sales & Marketing Team for a Summer Internship. Originally from Sweden, Elin moved to the USA to attend Barry University, where she is currently a  Junior majoring in International Business. She is also a starter for their Women’s Basketball team. Welcome to WTDC Elin!

WTDC welcomes Matias Perez-Albela to the team! Matias, originally from Peru, is completing an Internship with WTDC Operations and is a junior at FIU, double majoring in Finance and Logistics & Supply Chain Management. We’re looking forward to good things from Matias!

Record-setting ship sails through Panama Canal and up East Coast

The Chinese vessel COSCO Development became the largest ‘Neopanamax’ ship to traverse the Panama Canal during the first week of May. At 1200 feet long and with an enormous capacity of 13,092 TEUs (1 TEU = 20-foot container equivalent), the COSCO vessel is 300 feet long and has a can hold 8,000 more TEUs than vessels passing through the original canal.

Mr. Gazitua was ordained a deacon at St. Mary’s Cathedral by Archbishop Edward A. McCarthy 30 years ago, on May 2, 1987. Deacon Gazitua has balanced his spiritual responsibilities as a deacon with his commitments to his family and his career.

Mr. Gazitua is a successful businessman and community leader.  He is also well known for his religious service to his church.

Deacon Gazitua is engaged in several church ministries including the Law Enforcement and Firefighters (LEAF) Emmaus. His role in detention ministry at Everglades Correctional, where he leads RCIA and Liturgy of the Word for inmates each week, led to his assignment as Chaplain to Miami-Dade Police Department.

The Gazitua family owns and operates WTDC, a Foreign Trade Zone and Logistics company that celebrated its 40th anniversary this March. Ralph is WTDC’s Chairman and his two sons are also involved in the company: Luis Andre Gazitua is Legal Counsel and operates his own law firm Gazitua Letelier PA, and Sean P. Gazitua was promoted this year as WTDC’s President & CEO.

Over his decorated professional career, Ralph has held appointments to numerous boards including The Adrienne Arsht Center for the Performing Arts of Miami-Dade County Trust, Beacon Council, FIU President’s Council, Greater Miami Chamber of Commerce, and serves currently as Miami Dade College’s Chair for Supply Chain Management Advisory Council, and is an inductee of the Miami-Dade College Hall of Fame.