In a Bonded Warehouse, you are required to pay Harbor Maintenance Fee on each import. HMF is currently .125% of the merchandise value.

Did you know that in a Foreign Trade Zone you consolidate the HMF payments quarterly?

Paying HMF quarterly is a significant cash flow strategy and cost-saving measure for importers. Consolidating paperwork through electronic filing is just one of the many reasons companies are working with our FTZ.

Congratulations to Philippe Dennery, Freight Auditor, our March Employee of the Month! 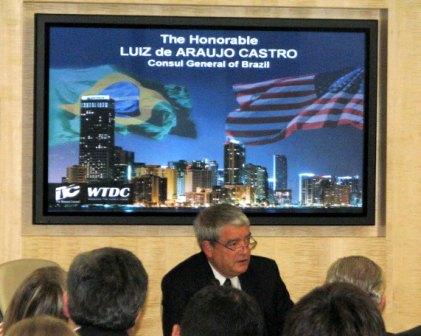 Yesterday Bloomberg published an article highlighting the importance of Latin America and Brazil’s economic impact on Miami-Dade county. Last year, WTDC sponsored an event with the Beacon Council focused on harnessing the growing Brazilian market.  The Beacon Council is prominently featured in the Bloomberg article for its continued efforts to attract foreign companies to Miami-Dade County.

Inside the Ropes at the Cadillac Championship in Doral

An annual tournament is a signature event for our Doral community and Tiger Woods won (again!).